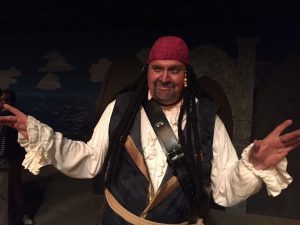 Uh-oh!  This podcast was taken over by a pirate.  Captain Cleytus Pitcher IV captured the microphone and tied me up so that I couldn’t speak to you this week.  He still shared the new stuff that’s coming

to Narration by George.  So, that’s good.  There are two short horror tales by Regina Puckett – Do You Want to Play a Game? (just released today) and Payback.  And there is the new Science Fiction epic, Second Earth M-104 by Michael Miller.  (The Captain just doesn’t get Sci-Fi!)  In the end, I was able to get the police involved and now he’s spending the night in jail. But, he’s still on the look-out for his treasure!