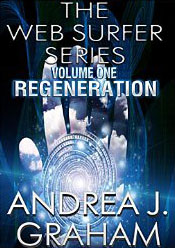 At the turn of the Twenty-Second Century, cyberspace had no bad AIs, only bad coders. However, AIs measure their lives in days, eternity is out of their reach, and they fail to bring about the advent of a holy infant in cyberspace. Alexander Lloyd McGregor is an infant, but he isn’t holy, and only he is saved from death by his father converting his cells into biological supercomputer components. The child develops an AI mind called Sander and a human mind called Alex. Sander is a bad AI subjected to slavery’s chains to get him to obey his code as he serves a billion users all around the world. He’s also a king who reigns over most of Earth’s computers, in a global society where tech-dependency can kill. Freedom’s calling to Sander like a siren. His answer could shake the earth.

In Regeneration by Andrea J. Graham, the Father of AI grieves for his stillborn son. His supercomputer lacks a stable identity due to inadequate wetware. The unstable AI proposes a solution to both problems: install the child’s body as the AI’s wetware.

Cleverly written, Graham knows her subject and is able to keep the reader’s attention.  If you like science-fiction, you will surely enjoy this new promising series. -Dutchy’s Reviews 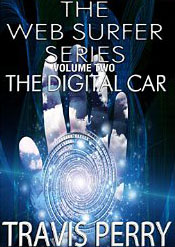 In Sander’s late teens, a new location on his global area network traps him in a century-old car traveling through Afghanistan. He fears his Islamic user is a terrorist and that he is a fake copy of Web Surfer.