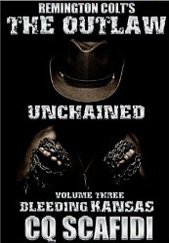 “Samuel Winchester, armed and dangerous, for the brutal slaying of a Texas Family, breaking U.S. Army regulations, escape from military prison in St. Augustine, State of Florida, aiding and abetting the escape of other prisoners and an attack on troops attempting to apprehend him.
His last known whereabouts were New Orleans. He is said to have escaped capture there by steaming north to St. Louis. He is said to be at large in either the State of Missouri or the Kansas or Nebraska Territories.
REPEAT: He is armed and dangerous. Anyone with information leading to the capture or death of Samuel Winchester should notify their nearest U.S. Cavalry Post or local law enforcement. A reward of $500.00 will be paid to anyone providing information leading to his arrest, capture or death.”

There was a crude sketch of Sam from when he was a young man, nothing like the lanky, bearded, tired looking man he had become. The poster was signed by a Lieutenant Colonel for Fort Leavenworth, Kansas.

I loved this book. It was a real page turner. -N

Sam Winchester, much like CQ’s other main characters had me from the first few pages even in a genre that was not my territory…. – AC

He writes historical fiction that is engaging and enlightening. I always seem to learn something new when I read his work. – MSR

The real history that CQ Scafidi details is something I never learned in school. -KMB