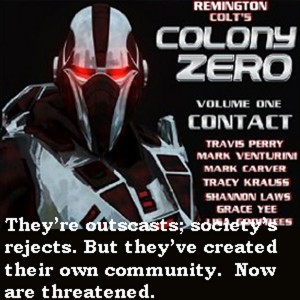 Some Zeroes are born, somehow slipping through the genetic screening and purification tests in utero mandated by an overpopulated Earth. Others become Zeroes later, the worst murderers and thieves and abusers, despite the same genetic screening. Whether born or made, they are Earth’s outcasts, the dregs, sent to a perpetually dark rock orbiting a Y-class brown dwarf star by a society without the patience or desire to deal with them.

The Relocation Ministry cites the humanity of the process, offering the Zeroes a chance at a new life. Yet the overcrowded world secretly knows with silent approval that they’re sent to Colony Zero for one reason: to die. That is until the RM ship Valkyrie 2 arrives on a routine survey mission to retrieve core samples. It is on that dark wind-swept planet that the crew discovers a far different secret.

In First Contact, the opening installment of Remington Colt’s Colony Zero series, the secret discovered not only threatens the crew’s deepest held beliefs, it threatens their return to Earth, a home where some soon realize the word “acceptance” has taken on a very dark and disturbing meaning.

This story will keep you guessing until the very end. -RS