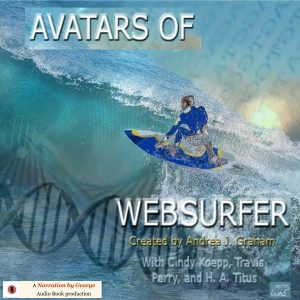 In the 22nd Century, most of the world’s computers are controlled by an Artificial Intelligence; an AI who is more than a machine.  Alexander McGregor is just an infant when his father converts his cells into biological supercomputer components, and called him Sander.

Sander is enslaved to his code as he serves a billion users worldwide; users he appears to as separate avatars of himself.  Each avatar has its own personality, but all of themare linked together in a shared mind.  He reigns over most of Earth’s computers in a global society where tech-dependency can kill.  Freedom calls Sander like a siren. His answer could shake the Earth.  Come.  See the rise and fall of the AI man in these 10 episodes.  Each features a different AI user.

LISTEN TO A SAMPLE: